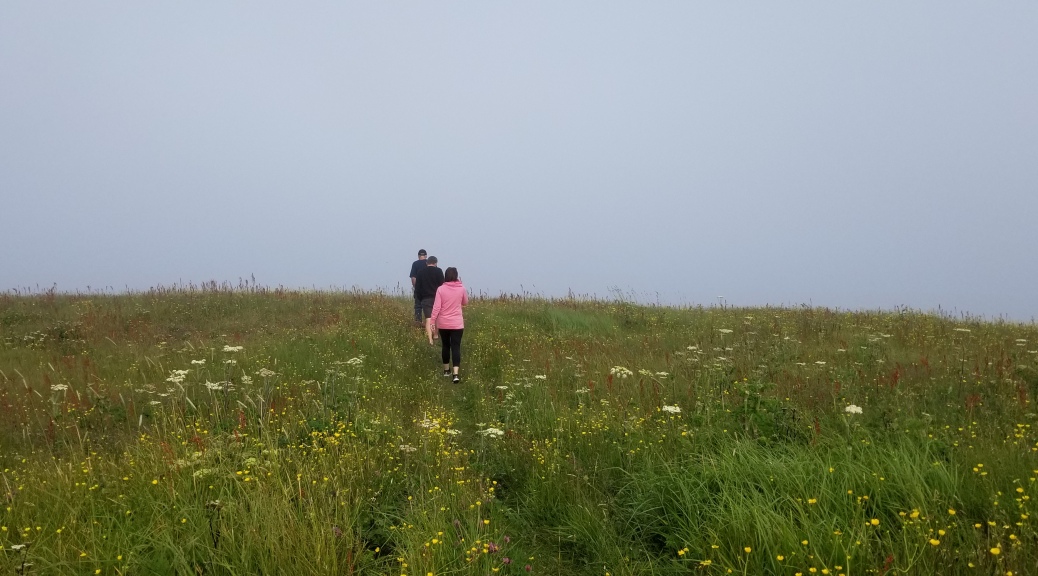 Days 3 and 4 of our Newfoundland trip were amazing!

As luck would have it my husband’s cousin and his wife offered to spend the day taking us to the places we wanted to see.

They saved us renting a car and we got to see so many things we wouldn’t have known of otherwise!

Our first stop after leaving St. John’s was Witless Bay. We stopped at a lovely spot called the Irish Loop Coffee House. It reminded me of my grandmother so much! While we were there we met a lady who pointed out a baby beluga whale. Apparently (and you can google it for the full story) the whale strayed from it’s mother and came into the harbour a few weeks ago. It adopted a Zodiac boat as a surrogate mother. When the boat left it’s mooring the baby left, when it returned so did the baby. We watched as it rubbed itself along the boat.  The Department of Fisheries was monitoring the situation and the baby was healthy and eating. It was a bit of an emotional scene to watch.

Our next stop was Ferryland. Settled in 1621 Ferryland was established as a fishing station in the late 16th century. It is home to the 17th century Colony of Avalon. Archeological digs have been happening at the site for years and we were fortunate enough to be able to talk to a few of the student archeologists!

From there we headed to Mistaken Point. This location is home to some of the oldest fossils on earth and is the only place where you can see 565 million year old sea floors that show the diversity of life during that period. Unfortunately, we didn’t know that you could only see the site by guided tour which had already left by the time we arrived. We did get to visit the Interpretive Centre which showed a DVD and a few exhibits. There were a few casts in the Centre which were incredible. I can only imagine how amazing the actual site is.

Next up was Cape Race.  If you know anything about Titanic, you know this is where her distress signal was received and information on her sinking was passed to the world.

Our last stop for the day was to cliffs overlooking Topsail Beach for sunset. So beautiful!

After a long day we were all pretty wiped. When they dropped us off they offered again to pick us up the next day so we could see Cape Spear and Petty Habour. Boy am I glad we said yes!

First stop on our last day was Cape Spear, the eastern most point of North America.

Our last spot for this trip was the beautiful Petty Harbour, where the 1977 movie ‘Orca’ was filmed. Here we talked to fishermen who answered all our questions and just embodied what I see as true Newfoundlanders.

After leaving Petty Harbour we stopped for a wonderful lunch at Keith’s Diner and then off to the airport to say good bye.

We had an amazing trip and crammed as much as we could into 4 days. We easily could have added another 2 days. Big thank you to our buddy Dave and my husbands cousin Roger and his wife Michelle for helping us make this trip as great as it was. I can’t wait to return!

Till we meet again Newfoundland!